Thanks for the info. Here's another one as he's 20 years old.

Center Ludwig Stenlund has committed for 2018-2019. Stenlund is from Sweden. He's played some time in the states. One for Odessa the last for Madison of the USHL. He's tall at 6'3.
Top

We will need more productive offensive players for next season, usually Swede's are swift with good puck handling skills.
Top

And players that stay healthy and protect their heads to avoid concussions!
Top 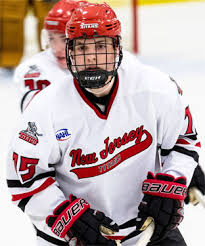 The New Jersey Titans, proud members of the North American Hockey League (NAHL) are pleased to announce that forward Ryan Naumovski has committed to play NCAA Division I hockey at Niagara University in Atlantic Hockey.
Naumovski, 18, is a native of Shelby Township, Michigan, and is playing in his first season with the Titans. In 53 games this season, Naumovski has 46 points (17 goals, 29 assists). Titans head coach Craig Doremus spoke about Naumovski, who joins the long list of players who have committed to play at the collegiate level....

Thanks for these updates on hockey. This guy needs help understanding college hockey. One of the news releases has an attachment listing college commitments by players in the recruit's NAHL league. I counted 12 commitments for Niagara.
I have quite a few questions to the better informed. In the ranking of junior leagues, how does this league rate? Is this a normal size recruiting class for hockey? How many players are allowed on a college hockey team? I think NU is still only allowed 14-15 hockey scholarship players so a lot of recruits are paying some real money. Is NU allowed to give regular scholarship grants on top of what ever the athletic scholarship is? Thanks.
Top

i can't answer all your questions but here is one. Football and basketball have full scholarships only, all other sport have scholarship equivalents. For example the NCAA allows you to distribute scholarships equal to a number times the value of a full scholarship. That dollar figure is pooled and distributed among scholarship players. The number varies by sport, hockey is 18, baseball 12. Conferences may limited schools to a number lower than the NCAA permits. I'm not certain if you can award other money based on need or academic performance.
Top

One of the news releases has an attachment listing college commitments by players in the recruit's NAHL league.

A ton of college hockey recruits from the NAHL league. I'm trying to get some info as to how it ranks. There are 7-8 top Junior A leagues which are the breeding grounds for the NHL (OHL, QHL etc). Not many college recruits at least from the AHC come from the Junior A leagues.
http://juniorhockeybook.com/junior-a-ho ... -a-hockey/.

How many players are allowed on a college hockey team?
College teams are allowed to dress 20 players for a game, but I don;t think there are any limits on roster size.

I think NU is still only allowed 14-15 hockey scholarship players so a lot of recruits are paying some real money.
The AHC is phasing in to full scholarships (18) over a three to four year period. I think we are up to fifteen at this point. However, partial scholarships are allowed so the money can be divided up. Also, there are other grant aid programs (merit, need) which can make up for some of this shortfall so most players at NU are getting a pretty decent package, if not full ride.

I will try to answer the junior league questions best I can. One thing that makes it confusing is that Canada and the States have two different structures.

In Canada, you have Major Junior, which sometimes is called Junior A. These leagues are the OHL, WHL, QMJHL, etc. These leagues are considered pro in the eyes of the NCAA and as such, it is very difficult for any player that has played Major Junior to play NCAA hockey. There is an appeal process and depending on the number of games played, it can happen, but not very often.

Then you have Junior B, the Canadian Junior Hockey League, which is the leagues that colleges recruit from. These are typically provincial leagues (BCHL, AJHL, SJHL, MJHL, OJHL, Maritimes and Quebec). The BCHL, OJHL and some of the Maritime teams are typically the strongest teams. Some teams cover the costs of their players and some are pay to play. More and more teams in Junior B have gone to somewhat of a pay to play model to help control expenses.

Tier 2 is the NAHL. This league does have some pay for play requirements, but some costs are covered by the teams. This league has some very good players in it just because not everyone can play in the USHL. This is more of a "National" league with teams spread out all over the US. You are seeing more and more D-I players coming from this league as the quality of play has really ramped up the last 10 years. A lot of players do get D-III offers as well. A lot of these teams would hold their own with the middle of the pack in the CJHL.

Tier 3 is pretty much every one else. Most of these teams are pay for play. Leagues like the NA3HL, EHL, WSHL and many more fall into this category. Some of these teams, especially in the NA3HL, are "farm teams" for NAHL teams. Every now and then a D-I recruit will come out of these leagues, but usually their top tier players are decent D-III prospects. A lot of these players can get some good Club Team offers.

Thanks much Millsy, this is an excellent analysis of the junior league system in the US and Canada. I had forgotten the Junior A Leagues in Canada are considered pro.

NU did have one recruit that came out of the OHL years ago, but only lasted one semester. I forgot his name.
Top

Re: Hockey Recruiting/ Millsy's analysis of the Junior Leagu

Okay, I got things a little mixed up on the Canadian side of the boarder.... They have three levels, Major Junior (pro in the eyes of the NCAA), Junior A, which is recruited heavily by NCAA teams, and Junior B, which is a lower level of junior hockey. Sorry for any confusion....
Top
Post Reply
279 posts